Most orders ship out free by tomorrow, February 1st

ASBESTOS IN A POPCORN CEILING

How to Handle Asbestos in Popcorn Ceiling

Back in the 1960’s and ‘70’s, acoustic, or popcorn ceilings, were quite common. Many of these ceilings contained asbestos, which was popular because of its fiber strength, insulation and fire retardant characteristics. But the health risks associated with asbestos have lead to strict regulations on its use. While it is still used in some industries like automotive and construction, asbestos has been significantly phased out of production. In ceiling applications, Asbestos texture was still being installed in homes through the 1980s.

So what about your ceiling? First, not every popcorn ceiling contains asbestos. Only certain manufacturers insisted on adding it as an ingredient. And if it does, the overwhelming consensus among scientists is that it won’t pose a health risk unless the ceiling is tampered with. So if you have a popcorn ceiling and are planning to replace it with a healthier and more aesthetically pleasing alternative, it is important that you first determine if asbestos is present. If it is present, you can choose to leave it in place and cover it as described in our popcorn ceiling article.

A common misperception is that you can detect asbestos just by looking at your ceiling. However, asbestos fibers are microscopic and can really only be identified by a polarized light microscope. You can take a sample yourself by shaving off a small piece with a utility knife, placing it in a ziplock bag and sending it to a certified EPA testing lab. Or if you would rather leave it to the professionals, there are certified asbestos removal companies that will take care of it for you. 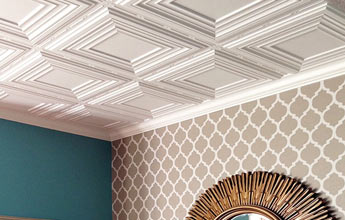 Whether you're looking for drop in tiles for a suspended ceiling, or direct mount tiles to glue up, you've come to the right place. Most of our ceiling tiles are 100% waterproof and many are certified for use in commercial and industrial applications. Browse our full line of 2x2 tiles. 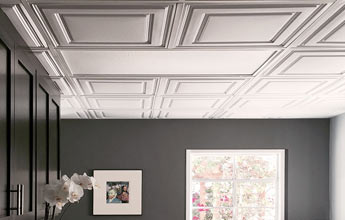 We carry several 2x4 ceiling tiles in designs that replicate the look of the 2x2 trend without the need to retrofit your existing installation. We also stock several styles that continue the traditional 2x4 look and feel allowing you to maintain a harmony with existing installs. 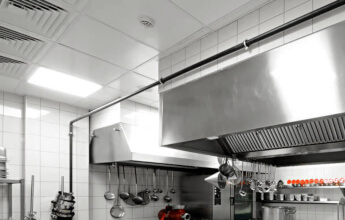 ProSERIES ceiling tiles are highly recommended in zones that are more demanding than typical homes and offices. They excel in commercial areas like; food prep areas, mechanic shops, manufacturing plants, and areas of high humidity 100% waterproof & Class A Fire Rated. 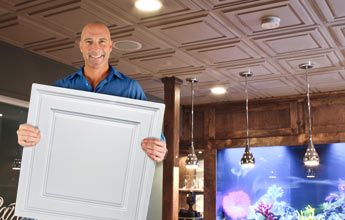 Our Stratford ceiling tiles are 100% Waterproof, flexible, easy to install in tight spaces, available in 12 different colors, and feature an attractive contemporary design that will compliment any space. Comes in 2x2 and 2x4 sizes for drop in grids. Browse our full line of waterproof tiles.